What was the first book you can remember reading that really grabbed you and carried you along?

I grew up in a house with three bedrooms and eight people living in it, so there was very little in the way of privacy or a little place to be by yourself. Mostly, we ran in and out of the house, madly playing football and cricket.

I read books at school but they made you read things that perhaps weren't right for a teen. I must mention here the Australian author Patrick White whose novel, about two strange brothers, The Solid Mandala, was given to us to read when I was about 15 or 16. It was too weird and slow and interior for us. I read it a  couple of years ago and - like all his work- it's pretty much a  total masterpiece.

I think, growing up, I read little bits of things here and there, and took them in quite hungrily. Things like J D Salinger’s For Esme With Love and Squalor. When a young adult, I read a lot of crime fiction. It was hard to find, mostly out of print. That made it good too. So I would say, The Postman Always Rings Twice, by James M Cain, had a big effect on me - made me think of ways to express things and illuminated my mind with thoughts of a wide open California. A definite adult world of drifters and working people. It was good to put my head in it when I was just moving into the rock music world which was becoming institutionalised youth culture.

Do you have a favourite book, one that changed you or that you have re-read a few times?

I don't think I've ever read many books twice. I used to collect all the Richard Stark books involving the character, Parker. Lee Marvin played him in a film called Point Blank. The books were all very formulaic, written by Donald E Westlake under the ‘Stark’ pseudonym. I loved all the masks involved. Each book had the same format, so it was almost like the same one! We did an album called The Devil Drives with an image of Lee on the cover and I did a live show called Point Blank as well. There is an amazing hard-boiled novel by Paul Cain called Fast One that I have actually read two or three times. 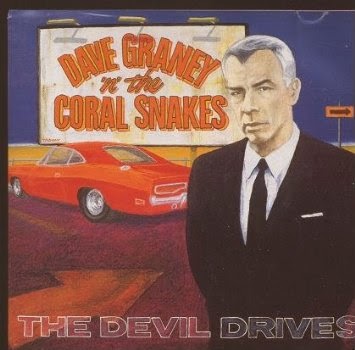 What was the most recent book you read and thoroughly enjoyed?

It was either a book about Captain Bligh’s trip in an open boat after the mutiny on his ship, The Bounty, and then the subsequent mutiny in New South Wales, when he came here to be governor... or a book about an explorer called McDowell Stuart, who walked from Adelaide to the top end for the first time. I probably most enjoyed Somebody Else, a book about the poet Arthur Rimbaud in Africa, after he'd given up writing.

Actually, I just remembered - I loved, A Narrow Road to the Deep North, by Richard Flanagan. It’s just been listed – deservedly, too! - for the Booker prize. (Since announced as the 2014 winner - ed.) An absolutely monumental, epic novel set in Adelaide during the Second World War and the Burma Railway. I highly recommend it - a masterpiece!

Who have been your favourite authors, and what have you learnt from them?

I bought four Patrick White books in hardback a few years ago and absolutely roared through them. He won a Nobel Prize for literature - the only Australian, and deservedly so. His books are unpopular - Too Good! An amazing writer. Everything I've read: The Vivisector, The Tree of Man, The Cockatoos, Voss - about a German explorer - Riders in the Chariot... Amazing.

I love a lot of Australian writers. David Foster is quite experimental and wrote a recent book called Sons of the Rumour, where he tried to tell the thousand and one nights in contemporary colloquial language. Two women, under the name 'M Barnard Eldershaw' wrote a great modernist- futuristic novel in 1945 called Tomorrow And Tomorrow And Tomorrow - amazing work. A contemporary writer called Delia Falconer wrote about Custer’s last battle in a great novel called The Company of Soldiers. I have read two great novels set in convict era Hobart which seemed to be a reconstruction of Georgian London of thirty years before - one by Christopher Koch called Out of Ireland. The other was by a writer with a very shady reputation called Hal Porter. It is magnificently ragged and raw but electrifying. It’s called The Tilted Cross. It’s about British class, seen through the Tasmanian reproduction.

Do you have a writing ritual, regimen or a tried and tested process?

I wish I did! Something like George Simenon or Zane Grey who seemed to be machines! I just avoid it like everybody and then panic and sit down for hours. Feel great and then feel shit. The usual!

So, what motivates you to write?

Its quite enjoyable! I don't know whether it’s as enjoyable for me as playing music or singing. That’s quite an unconscious thing that I really love, also the camaraderie of fellow players. Writing to order for stories is enjoyable. Trying to write an extended piece is a great challenge. I'm suffering that challenge at the moment.

What are the major differences between your approach to writing prose for a book and writing songs for an album?

Well, musical things are just dumb luck or mistakes for the most part. Also very intuitive and you make your own rules. Australian artists all make themselves up, we have very few archetypes to model ourselves after. I don't know what the business side of it is like or how its going to hold together in either pursuit. There's no retiring in music.

Do you think a writer has any social or moral responsibilities?

Well writers are mostly just scratching out a life yeah? Like everybody. These are pretty brutal times and the days of self destruction are pretty much over. Nobody cares much for that sort of thing, do they? It’s also a world of cheap sensation and buzz. It’s easy to stir up a lot of people but it’s hard to get a lot of sustained momentum from that sort of thing. I'm talking about outraging the mob. The mob just drifts away don't they? I live in Australia which at the moment is run by Rupert Murdoch and several mining magnates and companies. It is being destroyed. Ravaged. I guess artists have a responsibility to at least express their cognisance of the great scams that are going on.

Who do you admire, who would be your heroes / heroines?

I admire some people from a distance who would have probably been pretty hard work up close. The explorer Richard Burton, the dandy Beau Brummel. Those two mainly for their notoriety and the fact that people know so little about them. Jerry Lee Lewis, Jim Morrison, Hank Williams, Charlie Rich, Charlie Chaplin, Mick Jagger, the guitar players Grant green, Davy Graham, Kenny Burrell. I love some early TV shows like the Prisoner with Patrick McGoohan and the Avengers series. I love Dave Chappelle and a lot of British comedians. I think they're amazing actually. Those long shows by Stewart Lee and those Fast Show guys, Higson and White, Mitchell and Webb. I love the drama of Apollinaire and Rimbaud and the great, compact writing of the mysterious A E Coppard.

Now you have a long and successful writing career, do you have any advice or ‘words of wisdom’ for aspiring young writers of songs or prose?

My advice is to BE LUCKY. And also happy. Why ever not!

STOP PRESS: Dave Graney is currently playing select venues in the UK with his band 'The MistLY':

For more info on the music and books of Dave Graney, go to his official website.

Check out Dave Graney's Facebook for more info and any additional live dates...

- Dave Graney was talking to Remy Dean.
Posted by Questing Beast at 02:16