Lu Hersey's debut novel, Deep Water, won the MsLexia 2012 Children's Novel Writing Award, in advance of its publication, and has since been well-received by readers and critics. The story is inspired by Celtic mythology and teenage transitional angst, both embodied by its protagonist Danni, a teenage girl with a fairly unremarkable background who is unaware of a fairly remarkable secret about her past. The story starts with a mysterious disappearance and appears to be a crime drama, then a creeping strangeness begins to pervade events as Danni deals with changes - both internal and external. Lu Hersey talks to Remy Dean about her inspirations and approaches to writing contemporary magical realism for the youth of today...

Deep Water has been described as a cross between The Wicker Man and Susan Cooper – would you say it falls within the ‘Folk Horror’ genre?

The story has a strong folkloric element, certainly, but I’ve never thought of it as horror. I’d describe it more as ‘kitchen sink paranormal’, if such a genre exists! However, I’m immensely flattered to have any comparison with Susan Cooper, and I guess there’s a fair bit of Wicker Man type stuff going on in the background too… Maybe it’s ‘Folk Horror’ after all and I just didn’t realise it?

You open Deep Water with a quote from Joseph Campbell - I teach A-Level Media Studies and we look at his Hero’s Journey ideas in relation to narrative structures.

Joseph Campbell is one of my heroes – though it was only after I’d written the book that I realised Deep Water fitted neatly into the twelve-point Hero’s Journey narrative structure!

What did you learn from him and how did you apply it?

When writing, I was actually more inspired by Campbell’s theory that we - as in the human race - created myths to explain things we don’t fully understand, but ‘know’ deep in our subconscious. I was also very drawn to his - and Jung’s - ideas on universal archetypes, and wanted to use the shapeshifter archetype as an extended metaphor for the changes everyone experiences in adolescence - Danni transforming to her selkie form reflects the massive physical and emotional changes all teens experience in puberty…

This is beginning to sound strangely like I had a master plan and knew what I was doing! The truth is I’ve always loved the selkie myth and just wanted to explore ways to bring it into a contemporary setting.

Why do you think contemporary teenagers are still interested in old folklore and myths?

I think teenagers are drawn to stories that explore all things dark and inexplicable, and of course many myths do exactly that. Campbell felt it was important to keep myths alive, while adapting them to suit the times we live in, and I think he’s right. There are some brilliant takes on ancient myth coming out right now. Claire Mcfall’s Ferryman and Julia Gray’s The Otherlife, for starters…

What were you reading when you were the age of your readership?

I read loads of different stuff, like most teenagers, ranging from Dickens to Marvel comics. But I was really drawn to writers like Tolkien, Alan Garner and Susan Cooper – and my all time favourite, Ursula Le Guin.

Who have been your favourite authors, and what makes them stand out to you?

That’s a really tough question! To make it simpler, I’ll stick with favourite authors of teen and children’s books…

Most recently I’ve particularly enjoyed books by Maria Turtschaninoff, S F Said, Suzanne Collins, Eugene Lambert, David Hofmeyr and Julie Bertagna - all very different, but each with the ability to create amazing worlds that you can totally believe in.

I also love the work of Sara Crowe, Holly Black and Anna McKerrow - weaving folklore and magic into their writing in a really engaging way. And I can’t possibly compile a list of favourite authors that doesn’t include David Almond, J K Rowling, Frances Hardinge and Neil Gaiman…

Outside fantasy and SF genres, I love writers who create beautifully written, gripping stories with characters you can really relate to, such as Liz Flanagan with Eden Summer, Fox Benwell - writing as Sarah Benwell - with Last Leaves Falling, and Clare Furniss with The Year of the Rat. 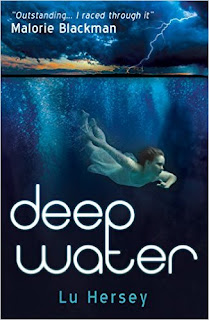 Deep Water is your debut novel and was remarkably well-received – how has this affected your attitude to writing and your approach to the follow-up, Broken Ground?

In some ways it’s given me the confidence to believe I’ve done it once, so surely I can do it again – though on a bad day I get terrible impostor syndrome and think maybe everyone made a big mistake…

I still haven’t completely finished my next book, Broken Ground - I must be on at least draft ten, by now! I honestly have no idea if anyone will like it when I’ve finished. I hope so…

Can you tell us about your writing process, do you have a regular regimen?

If only! I have a day-job working in a library, so writing time is limited and should be well structured - but of course it isn’t. Some weeks I’m compelled to write and manage 2000 words a day, then other times I struggle to get 300 words out in a week. I can’t do this thing of ‘just sit down and write, it doesn’t matter so long as you’re writing’ - it matters to me. What’s the point of writing 5000 words of total drivel? I’m hard on myself and edit constantly as I go along, even though I know it would be sensible to write a complete draft, however crap, and edit later.

I try and plan the whole book at the beginning, but that doesn’t entirely work either. The characters have a life of their own and take the plot away from the plan all the time - but I still find it useful to have an idea of what happens. I always know the beginning and the end, but the middle morphs and changes a lot.

Yes, I’m nerdy about getting detail right, so I do a lot of research into all aspects of the story. Landscape, myth, history, folklore, magic…

Some of my research is probably just procrastination, especially stuff like compiling images on Pinterest - which I love - but a fair amount feeds into my subconscious and I weave it into the story later.

As an editor of The Scrawl, I was aware of a deficit of female writers in our content, but with this year’s overarching focus on YA fantasy authors, we seem to be redressing the balance… Historically, there have been Edith Nesbit, Philippa Pearce, Susan Cooper. Angela Carter, Tanith Lee… I suppose we could start the list with Mary Shelley! And now we have the likes of J K Rowling, Angie Sage, Stephenie Meyer, to name but a very few.

I want to ask about your thoughts on gender and fantasy – do you perceive a difference in masculine and feminine approaches to the genre?

Yes, sometimes - but not always. If the author name wasn’t on the cover, could you guess the gender of the writer? It’s a very interesting exercise to read manuscripts without knowing. I help sift short stories for the Bristol Short Story Prize, where all entries are anonymous (the writer is allotted a number), and I can often correctly guess the gender of the writer – but sometimes I’m totally surprised. I think this transfers to all forms of writing, including fantasy/SF genres.

Obviously, winning the MsLexia award must have been a thrill and is of course a notable achievement - it is what drew you to our attention. I am reminded of Georgia O’Keeffe’s comment about being called, “the best woman painter,” by a critic, and being offended by this differentiation. I know this could be provocative, but by ‘compete’ I also imply that fair competition requires a ‘level playing field’ to start with - so, does excluding male writers from the running simply acknowledge that women are unable to compete with male counterparts?

I don’t think it’s about women not being able to compete with male counterparts - it’s more a confidence issue. Women often perceive themselves as somehow not good enough - even when they obviously are - and might not even consider entering a competition where they don’t think they stand a chance. For the same reason, you find most creative writing MA courses, or similar, have far more women students than men. Men generally believe in themselves and their abilities more than women do. Hopefully this will change over time.

And having said all of that, of course I wish that the competition had been open to everyone and that I’d won it anyway…

When did you know you were a writer? …and why did you pursue an MA?

I realised I was - potentially - a writer at primary school, when I found it much easier than other children in the class to write the script for the school play - it was only a puppet theatre thing. I loved writing the dialogue, and was genuinely surprised that no one else seemed to find it that easy.

Years later, I worked as an advertising copywriter, and although it paid reasonably well, it felt a bit like a Faustian pact, using my writing soul just to help sell stuff no one really needs. Writing commercial content for Tesco and similar companies wasn’t what I wanted to write at all, but I couldn’t see a way out. In the end I decided that in order to change direction and write a novel - which I’d always wanted to do, I had to give myself a really expensive deadline to force myself to do it - so I applied for the Creative Writing for Young People MA at Bath Spa. It’s one of the best decisions I’ve ever made. Which reminds me, I should have included Julia Green, the wonderful course leader, in my favourite writers! Great stories, really beautifully written.

As a relatively ‘new novelist’, what advice would you share with aspiring writers of YA fantasy?

Possibly the same advice I’d give to any new writer, whatever the genre – that it’s really worth getting good quality feedback from an early stage. It’s a long, difficult road to publication and once you’ve got going, writing courses, such as those run by the Arvon Foundation or the Golden Egg Academy, are invaluable for improving your writing, finding inspiration, and meeting other writers.

If possible, do an MA in creative writing! At the very least, find a critique group that will be honest about your writing and where it needs improving. You don’t always have to take the advice, but working in a vacuum isn’t easy.

Thank you Lu Hersey for your considered responses


More info and updates at Lu Hersey's own weblog

Posted by Questing Beast at 10:30 No comments:

You can also support The Scrawl simply by reading our articles on the Medium platform and giving us some claps of approval if you like - doesn't cost you a penny and can make a big difference: