What was the first book you can remember reading that really grabbed you and carried you along?

Probably the Famous Five by Enid Blyton. I was about seven and my older brother, by two years, had the whole series and I remember watching him reading them and re-reading them once he’d finished. So I picked one up and never looked back! It brought us closer together as children as we’d act out the stories – I was always George! I loved how the mystery unfolded and of course, the baddies were always caught!

Do you have a favourite book, or one that you have re-read a few times?

Cross Stitch by Diana Gabalden. I have read this book at least ten times over twenty years! It has everything I love – Scotland, Highlanders, magic, standing stones and a good love story. Now they have made it into a series called Outlander on television. This is the first in the series. The first three are fantastic, but sadly, it’s gone on too long now and the story moved to America, which lost my interest. So, in my head, the characters moved to America and that was that!

What was the most recent book you read and thoroughly enjoyed?

An Unhallowed Grave by Kate Ellis. I met her at a book evening. I’d never read a murder mystery before but I love watching Midsomer Murders and Miss Marple, so I gave it a go. It was very similar to watching Midsomer Murders, except reading the story instead of watching it! Very easy to ‘see’ the characters playing out the scenes and although I guessed the ending, it was still a good book.

Who have been your favourite authors, and what have you learnt from them?

Barbara Erskine has always been a favourite, along with Diana Gabalden for fictional books, but mainly I read non-fiction as I haven’t had the time to read novels, so dipping into informative books or spiritual magazines have become the norm.

I’m not sure I learned anything from the authors, though a review of Echoes, by a local bookshop gave me the biggest compliment by saying, ‘This book is perfect for Barbara Erskine fans!’ So, perhaps on a sub-conscious level I picked up something?

Do you have a writing ritual, regimen or a tried and tested process?

No! I don’t really have that luxury. I have a child with special needs, so I can only write when she is at school. She goes in her taxi, I walk the dog, grab a large coffee and get to work for a few hours, quick lunch, then back at it, until half hour before child comes home to prepare myself to change from writer back to Mum!

I don’t aim to write a particular amount per day - Monday to Friday - and I keep weekends free, unless editing and there’s a time limit. Along with writing and researching, I’m answering e-mails, getting out there in social media land, interviews and general stuff.

Did you ponder the ‘first name or initials’ decision and was the choice of P J to avoid gender prejudices?

It was always going to be P J Roscoe. When I first began, I considered being elusive and mysterious and no one ever knowing who I was! I liked the idea of my readers never knowing if I was male or female, but that quickly fell by the roadside as I did interviews and pictures were needed! I use Paula J Roscoe for my faerie books to distinguish between my adult, supernatural thrillers that have sex and violence, and those aimed at young readers.

You have written two books for ‘grown-ups’ and one for younger children… how does your approach and/or frame of mind differ when writing for these different audiences?

I’m not sure anything changes. I wrote Echoes many years ago, before my daughter was born, then it was placed in a drawer for years until I finally pulled it out again.

I wrote 15 faerie stories for my daughter when she was young, and they will now become the Adventures of Faerie Folk series, over time. I wanted to teach children morals and to live in harmony with each other.

I write whatever comes to mind at the time. I have so many short stories resting in a file, waiting to decide what to do with them! I have two books out in Autumn 2016 and another in 2017, and I’m researching the prequel to Echoes, titled When Roses Fall.

I sit, I write, and see what comes out. My head is full of ideas for stories for young and old, so never had writer’s block, I just can’t type fast enough!

What would you like to have learnt about writing and publishing earlier in your career?

Everything! I knew nothing when I started and would feel utterly broken on receiving a rejection for Echoes, but once I wrote historical articles for a magazine and every one was published, I was elated, but paid very poorly! I did a distance writing course that gave me a chance to try every type of writing – poetry, journalism, fiction, et cetera, but it became obvious very quickly, fiction and history/supernatural was my forte. Writing for women’s magazines was definitely not!

I wish I hadn’t spent so much time, money and energy on terrible book covers. My first one for Echoes was my attempt at being clever! It was a simple abstract image, which was important to the story, black on a white background. I wanted readers to judge the book, not the cover - which, once they read the story, it would mean something – it didn’t work! Except in competitions, where they judged the story and it won three awards in two years.

I wish I was better at marketing and getting my books out there – which is happening, but slowly. I just don’t always have the time to twitter seven times a day and stuff!

What motivates you to write?

My head. If I don’t write, my head is going to explode – I’m fairly positive on that! I have so many stories waiting to come out. I love my imagination and I love telling stories. When I write, I am truly happy as I delve into another world, meet new characters and share their adventure – I guess that motivates me, along with the hope that one day soon, I will live off the proceeds of sales and take the pressure off my darling husband who constantly supports me in my dream job.

Thank you, Remy for interviewing me. Many blessings.

For her next book, a novella titled, Diary of Margery Blake, Roscoe is moving away from paranormal thrillers, she explained, “It’s life seen through the secret diary of a young 19th century bride. Married off to a man she barely knows, she learns that ‘husband’ is merely another title for owner, beater, brute and bully as she endures his rights to her body in order to produce an heir. It was a strange experience, almost as if I was possessed by the energy of this woman – the novella wrote itself more or less. If I ever find out that a Margery Blake really lived, then there’s your supernatural element!” 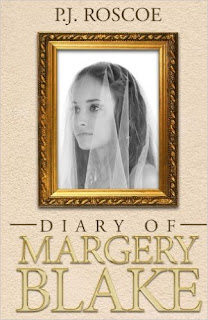 Back in the paranormal time-slip genre, Between Worlds is due out December 2016, through Crimson Cloak publishing and Ingrams, and her previously self-published novel, Echoes, has just been picked up by Doce Blant Publishing, and is expected to be re-launched before the year is out.

For more news and info, check out the official P J Roscoe website...


P J Roscoe was talking with Remy Dean
Posted by Questing Beast at 02:03